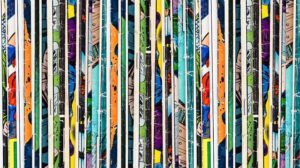 Gender-bending is popular in fan art and cosplay, but in some rare comics, it’s canon too. Here are some of our favorite gender-bending moments.

There’s something about a comic book that brings back nostalgia and awakens the superhero in all of us. But, as the world continues to evolve and be more inclusive of people of all genders, it’s no wonder why you’re looking for some rare comics that feature gender-bending characters.

We don’t want to continue keeping the green lantern off, so let’s shine the light on some of the most “MARVEl”-ous gender-bending comic book characters that deserve some recognition.

We all know who Wolverine is, but have you heard of X-23, the daughter of Wolverine. You’ll find her lurking in the pages of X-men Evolution, slashing her way through her father’s legacy.

Unlike, Wolverine, she doesn’t have the same amount of claws or powers that her father has. But, she still can heal after being wounded and at least 2 claws to use in battle.

When you think of Vision in the Marvel Cinematic Universe, you see a man who graces the comics’ pages. But, in the Ultimate Galactus Trilogy, the robot has taken the form of a woman.

The purpose of the female Vision is to help warn the human race about dangers that will be inflicted on them by Galactus. Then she takes her place beside some of the other Marvel superheroes to keep the human race from this certain doom.

Some of her best qualities are because she has characteristics that the male Vision doesn’t possess.

One of the most beloved sidekicks of all time is Robin, who helps Batman fight his way out of many situations. We’re commonly used to seeing Robin as a male, that is until you take a closer look.

Throughout the year’s many people have played the character of Robin, and quite a few of those that played the onscreen sidekick were, in fact, women. Think Stephanie Brown and Carrie Kelley the next time you want to have a crush on the Boy Wonder.

Long before Black Panther was played by the late Chadwick Boseman, the character came to be in 1966. We know that the panther suit bestows its powers upon the person that has earned the right to wear the suit. And in the movie, Shuri is the younger sister of T’Challa, responsible for all the gadgets he uses in war.

In the comic book, Shuri is jealous that her brother, instead of herself, is the black panther and chooses to put the suit on when her brother isn’t able to. As she fights, the Gods that bestow the Black Panther’s gift deem her worthy, and she becomes the female Black Panther.

When it comes to these rare comics and characters that have defied the rules of what gender a superhero has to be and other gender roles, you’ve got to look carefully. You can’t overlook the female’s Robins or X-23 when compiling your list.

And now that you’ve got a better understanding of these characters, check out some of our other posts. Don’t waste time Avenging the posts that you’ve missed scroll through now.