Skip to content
HomeComputerNotebook vs Laptop: How Are They Different & Which One is Right for You? 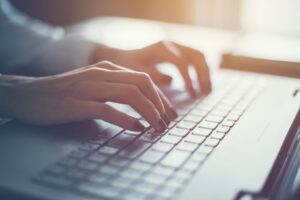 Do you know the difference between a notebook vs laptop? Learn how they stack up &amp; find out which is the right pick for you here!

The first laptop computer to be available commercially was built in 1981. It cost nearly $1,800 and was known as the Osborne 1. The keyboard was built into the device’s lid and the screen was five inches long. Despite that, the machine still weighed more than twenty pounds.

Clearly, we’ve come a long way since then. Notebook and laptop computers can be great for people who work remotely or need to be mobile. And now, you no longer have to decide between portability and functionality.

But what does it mean when it comes to a notebook vs laptop. Are they really all that different or are they just marketing terms? Keep on reading and we’ll give you all of the information that you’ll want to know.

What Is the Difference Between Notebook and Laptop Computers?

These days, the mobile computing industry is more confusing than it’s ever been. Now, consumers can buy a variety of devices that can be described as:

Some people may simply decide that a smartphone will take care of the majority of their mobile computing tasks.

The difference between notebooks and laptops is a bit fuzzy. Usually, a laptop will weigh around five pounds and be around two inches thick. A device referred to as a notebook, on the other hand, is usually no more than three pounds and no more than one inch in thickness.

With that said, there are still other forms of the “book” computer. A netbook is usually even smaller. They also tend to be much less expensive and are designed for simple computing tasks, such as browsing the web, checking emails, and word processing.

Tablets can be available at all kinds of price points and with all kinds of capabilities. The more expensive convertibles or hybrid models, such as the Acer Chromebook or Microsoft Surface, come with bigger and higher resolution screens.

They also come with detachable keyboards. This puts them on par with laptops and notebooks for ease of note-taking and capability.

When it comes to computing, size matters. An added pound of weight in a notebook or laptop might not sound like a whole lot. However, you’ll likely start to appreciate the difference after you have to carry it around in your backpack or balance it on your lap.

It’s important to remember, however, that the less a device weighs, the more it usually costs. Heavier models usually come with lower price tags. While leaner computers tend to come at a premium.

With all that said, if the size of the display is important to you, then you might choose to sacrifice some portability and lightness for a bigger model. Smaller computers tend to have keyboards that are more cramped. This can be uncomfortable for some people.

Before you make a purchase, you should check your budget and weigh it against how you plan to use your business or personal laptop. Do you need to do something intensive like a photo or video editing? Are you a dedicated gamer or a power business user who tends to use several apps at the same time?

Or are you someone who just wants to perform some basic computing tasks like surfing the web and video chatting with family and friends?

While prices have evened out greatly in recent years, notebooks and laptops still tend to be more expensive than desktop computers. You pay a premium price for being able to carry your office around with you.

Of course, this also depends on the brand that you’re buying as well as the tech specs of the device. You can always save money though by shopping for great deals.

Lenovo is a computer manufacturer that tends to offer steep discounts on their devices. And you can find plenty of deals at Lenovo.com.

Also, unlike PC desktop computers; tablets, notebooks, and laptops are usually difficult or nearly impossible to upgrade with interchangeable parts. If you purchase one, you want to pick the model that has all of the features that you want at the time of the purchase.

Important Factors When Buying a Laptop or Notebook

There are several factors that determine a notebook’s or laptop’s price, power, and performance.

There is also graphics (GPU). If you intend to do a lot of gaming or use virtual reality (VR) applications, then you’re going to need a powerful graphics processor. Having a high-quality graphics card in your laptop can add as much as $1,000 to the price tag.

Another factor is how much memory space (RAM) the computer has. A standard inexpensive notebook or laptop will have around eight GB of RAM. This is sufficient for basic tasks.

If you plan to run several apps at the same time, then you’ll likely want more RAM. And if you’re a gamer or a power user, then you’re going to need at least sixteen GB of space.

An SSD drive will have a lot less capacity than an HDD drive, though. If you want more disk storage space, then you should think about using an external hard drive.

You’ll also want to think about additional features. This can include Bluetooth, headphone jacks, HDMI inputs, and fingerprint readers.

The brand of the device is also going to determine how much you can expect to pay for your computer. Cheaper models that don’t do as much will only cost you a couple of hundred dollars. Portable computers from high-end manufacturers, like Microsoft and Apple, can cost you thousands of dollars, depending on the specs and model.

The biggest reason why most people get laptops and notebooks is because of how portable they are. However, if you intend to use your device “unplugged” frequently, then you need to know what the average run time of the device’s battery is.

Thanks to more efficient SSD disk drives and processors, as well as improved battery technology, average run times for some computers can be fourteen hours or more. But there’s still a lot of variation.

If you plan to use your device for long international flights or out in nature where you won’t be able to easily charge your computer, then you want to make sure that you get a computer that has long battery life.

It’s also important to remember that many manufacturers will exaggerate the battery run times of their devices. They also might give the run times for when the computer is being operated under ideal conditions.

The duration of your battery’s life will greatly depend on how you use it. Doing some basic word processing is going to affect the battery a lot less than streaming 4K videos.

Make sure to check out third-party reviews to get a better sense of what the battery life is actually like. Also, as the battery gets older, its lifespan will decrease. So the battery that you’ve had for six years is probably going to die a lot quicker than a battery that’s brand new.

Also, batteries for sealed devices – such as tablets – can be costly and difficult to replace.

The Importance of Knowing the Difference Between Notebook vs Laptop

As we can see, when it comes to the notebook vs laptop debate, the differences can be murky. However, we can gather that notebooks tend to be slimmer and lighter than laptops.

Still, it’s important that you do your research before making any purchasing decisions. Hopefully, you now feel that you can make a more informed and confident decision when you buy your next computer.

Are you looking for other helpful tech articles like this one? If you are, then you should definitely make sure to check out our site for more today!