Skip to content
HomeGeneralTime Zone History: Everything to Know About Why We Have Time Zones 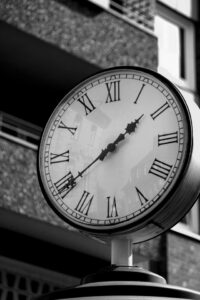 Wondering why your friend in London is five hours ahead of you? Who created time zones? Read on for a time zone history lesson!

From a 21st-Century perspective, time zones just make sense. After all, who would want to call a distant friend to chat if they were at work or sleeping? Time zones are essential to a global society and economy.

But what about time zone history? Who came up with the idea? Surely, something must have prompted this type of standardization.

Yes, a few things did lead to standard time zones: mainly industrialization and the rise of high-speed transportation. Keep reading to learn the details of what happened to bring this structuring framework into existence.

It’s hard to imagine a world without time zones. You have to wonder how people agreed on times to meet or when to begin and end their days. The answer is that, for the most part, they took their cues from the sun.

People kept time locally, using the sun’s highest point of the day to determine the noon hour, and they set their watches based on this indicator. Sometimes, there was a town clock. Other times, a resident would charge a small fee to let people use his watch to adjust theirs.

Even though farmers, the most numerous group of pre-industrial workers. They could follow the seasons and daily livestock routines. But they still needed to know when to expect visitors, send their children to school, and so on.

Differences between distant locations were of little concern before the 19th Century. Travel took a very long time, no matter what, and long-distance communication was simply another reason for travel.

With the advent of railroads (a common carrier) in the 1830s, people realized that there had to be a new system in place. Those traveling any distance at all needed to know when trains would arrive at their stations and then reach their destinations.

A Growing Demand for Precision

First, though, the public needed to experience a more accurate form of timekeeping so they would be able to articulate what they needed.

Soon, a solution fell into place with the chronometer’s invention. This technology eventually replaced the pendulum clock in every way, except as a conversation piece.

The demand for precise time only became more acute with the demand for precision overall, as the rural agriculture-driven economy gave way to fixed hourly jobs in cities. Workers had to know precisely when it was time to punch the time clock.

As the 19th Century progressed, railroads and cross-country travel took root in American life. Railroads were helped by the telegraph. This relatively new technology could send notices alerting oncoming trains to accidents and delays on the tracks.

North America had some of the greatest distances for trains to cover. Smaller countries, especially in Europe, also had reasons for imposing order on timekeeping processes. For example, several had overseas empires to oversee.

In 1878, Canada’s Sir Sandford Fleming came up with the time zone concept. He recommended dividing the world into 24 longitudinal zones, each spaced 15 degrees of longitude apart.

You can’t designate time zones randomly, though. And various meridians were in use by different countries for longitudinal reference before the late 1800s.

In 1884, Britain held an international conference on selecting a prime meridian. The Greenwich Meridian was the top choice.

The Greenwich Observatory held a reputation for the reliability and accuracy of its navigational data publications. Many people had already informally accepted the Greenwich Meridian as “prime” before the conference even began.

How Are Time Zones Determined?

We say “approximately” because you will see some jagged lines here and there if you look at a time zone map. Some time zones look more like blobs. And there are others with overlapping time zone areas or half-hour, not hour intervals within them.

These divisions might not seem all that standardized. But there are other factors besides longitude that have a role in how time zones’ formation and occasional boundary shirts. National borders and state lines are one factor; broadcast media coverage is another.

In 1960, the International Radio Consultative Committee formalized UTC’s concept, and it was put into practice the following year. The name “Coordinated Universal Time” became official in 1967.

UTC (or UST) is always within one second of mean solar time at 0° longitude and is not adjusted for daylight saving time. UTC works in sync with International Atomic Time (TAI). TAI represents the combined readings of around 400 highly precise atomic clocks worldwide.

The Importance of Time Zones Today

UTC has been a boon to those who telecommute, especially overseas. For example, someone working in the eastern U.S. might need to coordinate a meeting with someone in eastern Australia.

UTC is not a time zone per se. Instead, it’s a standard for keeping their clocks closely synchronized and coordinated.

If you need to do time zone conversions, from UTC to EST, for example, the Numi calculator app and time zone converter could be very beneficial. It can be tricky to figure out time differences, especially between two distant locations in other countries.

Today’s rapidly globalizing economy has seen the growth of instantaneous language-translation software and devices, as well as continuous air travel. It’s easy to tell that time zones are more important than ever before. Will this ever change?

Will There Always Be Time Zones?

Throughout time zone history, people everywhere have become more aware of time as a tangible concept. On the one hand, it helps us stay in contact with one another.

Like the farmers of past centuries, we’ll always have the sun and our “body clocks” to survive. Will we, at some point, abandon the imposed industrial and post-industrial structure of time in favor of a more naturally guided way of living?

As the saying goes, “Only time will tell.”

If this slightly technology-focused article has piqued your interest, you can read a lot more about apps, devices, and other technology subjects on our website. There’s always something new!